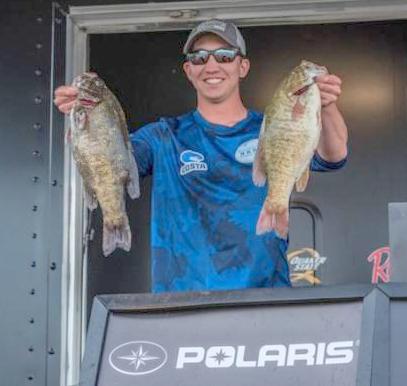 Drew Tiano is an aspiring professional fisherman that didn’t own a boat until earlier this month.

The Hudson native has competed in many tournaments, but always on someone else’s vessel as a co-angler. That all changed after the Costa FLW Series tournament at Thousand Islands.

As a co-angler on Kyle Hall’s boat, Tiano took home the top prize in the tournament, which included a brand new Ranger Z175 with a 90-horse power outboard motor and $600 cash.

“It felt great winning the new boat,” Tiano said. “This has been a longtime dream of mine to pursue a career in bass fishing. This boat just helps me get my foot in the door to fish these FLW events as an angler.”

“I held the lead every day of the tournament. This was due to the amount of time, prior to the tournament, my brother and I spent fishing on the St. Lawrence,” Tiano said. “Leading the tournament every day also kept the pressure off me. The 171 anglers behind me were the ones who needed to bring big bags of fish to the scales in order to have a chance at knocking me out of the lead.”

Being a co-angler presents a number of challenges, but Tiano made it look easy.

“In these tournaments there are two people in each boat — an angler and co-angler,” Tiano explained. “A co-angler is someone who is fishing out of the back of the boat and the angler fishes out of the front. Usually the fish are living on specific spots that the angler gets the first couple casts at. This gives them the best opportunity to catch fish, leaving their co-anglers with whatever they haven’t already hooked. The best way to have the upper hand on the angler is to put your time in practicing and know exactly what baits the fish want to bite. This is the only reason for my success in the past tournament.”

This isn’t the first big win for Tiano, though it’s the first that came with a boat. He has also won the Thousand Islands BFL Super Tournament, which came exactly a year prior to this win.

He has also won a number of local club tournaments and in July he placed third on Cayuga Lake out of 70 competitors to qualify for the national championship on the Potomac River.

At the national championship, colleges from all over the country compete for the top spot, which comes with a new boat and a chance to be entered into the Forest Wood Cup where the top prize is in the neighborhood of $300,000.

“This is a huge opportunity for publicity for the college and myself. This is the first time SUNY Cobleskill has ever qualified for the national championships,” Tiano said.

Tiano is entering his final semester at SUNY Cobleskill, which drew him in four years ago due to its strong Agriculture program.

Tiano began fishing competitively five years ago and now he can see a clear path to making a living on the open water.

“I started out fishing local club tournaments in the Hudson Valley region,” he said. “Since then, I have worked my way up to fishing the BFL and Costa Series presented by FLW Fishing. Ever since I was young, I grew up fishing my pond for bass. However, it wasn’t until later years my brother introduced me to tournament bass fishing. Ever since then I have been hooked.

“I view fishing as a potential career path. It is a life-long dream and I believe I am currently on the way to making it a reality.”

With bass fishing being such an expensive sport to participate in, Tiano is currently looking to partner with local sponsors to help make his dream become a reality. Anyone interested can contact him at drewtiano@yahoo.com.